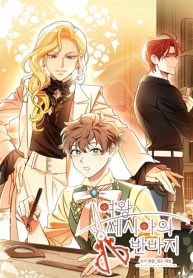 Empress Cesia Wears Shorts manga – Empress Cesia Wears Knickerbockers manga – Empress Cesia Wears Knickerbockers manhwa – Queen Cecia’s Shorts
Sypnosis: With 99 nations conquered and the cup of the ruler in her hands… you’d think she was off to a heroic conquest, but the great queen’s Cecia’s real concern was her uncomfortable corset? The queen of Valencia suffered from complicated laces and heavy corsets, and thus ordered her trusted brother, Duke Ennon Lionheart to bring her comfortable clothes. Meanwhile, Yuri, a clothing designer was killed in an accident after suffering from a small minimum wage at a medium-sized clothing company in Korea. She was reborn in a medieval country ruled by Cecia. Yuri vowed to revolutionize the outdated clothing dilemma, so she dressed up as a man and worked as a designer at the top of the continent’s highest court to do easy business. But… what happens when Ennon discovers Yuri’s true identity…?