My Childhood Friend Can’t Be This Big! 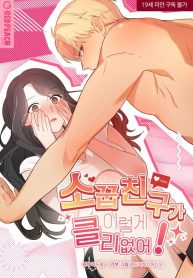 “That’s true. It’s hard to recognise someone you’re friends with since childhood just by looking at their dick photo, isn’t it?”
Unlike Seoyeon who has lived ordinarily, her friend, the golf star Lee Won, lives a splendid life.
Perhaps it’s because Seoyeon grew tired of being compared to him for over 20 years… that she decided to run a social media account for adult items.
One day when she posted a usual product review, she received a photo of a solid six-pack through a DM.
[sdfesdfa] That photo really is me. Ah, and my dick is no problem, too. If you want a photo, I could show you.
Yes, this is all just curiosity.
A man who has such a tasty—
I-I mean, a nice body like this is sending a message,
and what kind of woman is able to resist?
“But if he’s not just a lunatic, but a handsome lunatic… it’s probably fine if I enjoy for a bit, right?”
In the end, she replied to his DM.

My Father Is the Enemy of My Past Life?

I Became The Sister In Law of My Ex Fiance