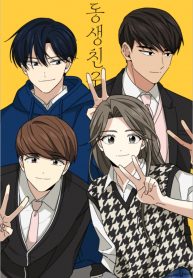 Gaeun is a senior student in college, who is currently living with her younger brother after their parents died in an accident. Gaeun has always been a bright and optimistic girl despite the desperate situation she’s in. She lives her all with confidence and smile to hide her pain. After her break up with her boyfriend Gaeun is determined not to date anyone anymore. If her ideal boyfriend doesn’t work either, it’s unlikely that it’s going to work with anyone else. However, Gaeun soon finds out that life is not that easy. She somehow gets close to Dowan, a boy she has known since they were young. She also gets tied up with Sangwoo, the Vice President of her younger brother’s class, and another boy named Joon, a student who studies at the Art Academy. One day, Daeun decided to send an invitation to all of her friends saying that she has decided to get married with her younger brother’s friend. Who could it be?

The Bite of A Wolf