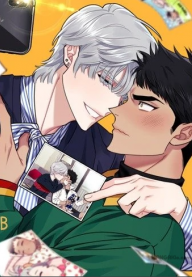 Read Stranger Than Friends – Stranger Than Friends manhwa – Stranger Than Friends manga update free at Bibimanga
Yi-hyeok and Inseo have been growing up together since they were born. They have been so close that it feels like they probably knew each other in their past lives. They consider the other as their best friends for their whole lives. It’s something they take as obvious things. Or, at least, that’s what they think until Inseo kisses Yi-hyeok through recreating old photos challenge. That evolves their friendship into something new, with strange feelings gradually emerge between them. They’re still friends, despite the fact that it’s very humorous, very steamy, and a little unusual, aren’t they?
Read Stranger Than Friends yaoi manga
Alternative: Less Than Others / Namboda moshan sai / No Better Than Strangers / 不及他人的关系 / 남보다 못한 사이

Go down till you see read first , click that

why if thiis was strait it be like boring llooloollll

??wanna scream it to goood

I am being forced to read this help

So like…How the hell do you guys READ THIS SO BRAVE LIKE…EVERYDAY THEY HAVE s£$….I MEAN IM NOT HATING OR EVERYTHING BUT HOW DO HELL DONT THEY STILL HAVE A BABY-

Huh? Why do they not have a baby?…because they’re men and this isn’t the omega-verse…are you in the right place?

They are both Boyd and they are using a co**om

In some cases that is not always true, boys can get pregnant, it’s just less likely that they will.

i feel bad for you inseo cuz everyone is seeing your man……..

No because that’s so sad

Dang. I sooo want the boss to make a move on Hyeok and then Inseo’s gonna see it so he’ll get jealous and realize he likes Hyeok.

Holy shit. Whens the s2 gonna be up? ?? Thanks for uploading this.

So i wonder ifhell become top?

The amount of times people say “no” in this comic, and the other person doesn’t listen is disgusting. Consent needs to go both ways

Do you know the difference between consent and saying no when having intercourse? Consent is there, for most scenes of course not all, but usually, the term no in this comic doesn’t exactly mean “No.” But you do make an excellent point. Consent needs to go both ways. But I do suppose that some scenes that aren’t precisely consensual help one another know limits, and when to stop when needed.

Gross, I said comic instead of manga. T^T

From Bread to Closets

Only Realised After Losing You