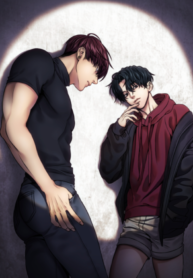 Other name: The Pawn’s Revenge – A World of Objects – Chesspiece – The World of Chess pieces – 기물들의 세계

As a male prostitute in the slums, Je-oh is at the bottom of the social hierarchy. A pawn among pawns. Sure, he’s tried to break away, but each attempt has only left him with more wounds. Until one day, he gets rescued… by a serial killer who kidnaps him along with his pimp. The killer, Seong-rok, is on a mission for his lover, a former prostitute plotting to turn the tables. Why he rescued Je-oh is unclear, but a slick-talking man whore was not part of anyone’s plan. Regardless, Je-oh is no ordinary pawn. Now that he has entered the game, he will use every trick up his sleeve—or in his pants—to get revenge.

I’m in love woth this (≧▽≦)

I’m in love with this (≧▽≦)

okay i m addicted to this

Bro my bday is the same as jeoh