The Words In Your Snare 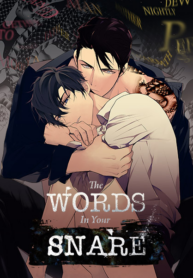 The Words In Your Snare – The Words In Your Snare manga – The Words In Your Snare manhwa – The Words In Your Snare [Mature] updater free
A recluse by choice, young cafe owner, Lee Jooin, has fled the hustle and bustle of Seoul to live in the countryside in peace. His peculiar ability to read people’s thoughts as text left him unable to trust or face the words left behind in his broken home. But, his peaceful new life is suddenly interrupted when a sack of drugs winds up on his doorstep. With that, he finds himself tangled up with an unusual new customer, the right-hand man to the infamous Sa Gang, Mookya. Besides Mookya’s adorable quirks, there’s one thing about him that Jooin can’t ignore; the fact that he can’t see Mookya’s thoughts. After longing to find someone with whom he can have a normal relationship, Jooin follows Mookya back to Seoul. But, with an incestuous brother who’s been waiting for Jooin’s return, life-threatening investigations with the police, and other mind readers to worry about, their relationship ends up being anything but normal. As both of these mysterious men become more and more infatuated with each other, their hidden pasts begin to unravel and they find their social circles overlap more than they realized. But, how long before they are torn apart by the words they never wanted the other to hear?

I think the author is the same

When is the next chapter coming out!

Omg he have so bad hallucination

Bruh that fighing for its life

I swear the two police guys are so annoying. Eugene especially bc he’s so annoying and perverted and invasive.

Ngl this is soooo good, I’m like actually hooked and finished it in 2 hours, I need more ?